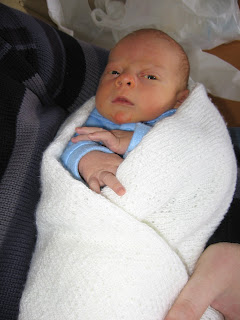 My new grandson, Elliott Thomas was born last week - what a perfect Spring present - this little boy is surrounded by love, just like he should be - welcome to our wonderful world beautiful boy ..

While I was over in Tauranga last weekend my son Cameron and I were out in his garden doing a spot of weeding and dead heading as you do, I found many bumblebees and honey bees on the Perris japonica - the sweet scent from this plant was very strong. I saw alot of small bumblebees so I 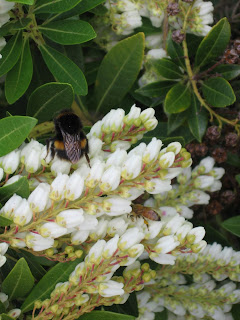 gathered there must be a nest close by. After some swift talking I managed to convince Cameron that he didn`t need to go looking for it so he could spray it to kingdom come ! I really like bumblebees, in fact I have a small tattoo ( horror, gasp etc) of a Bombus terrestis on my upper arm - where it can be covered if need be !!
Posted by Ngaio at Thursday, August 30, 2007 9 comments:

The sustainable garden, situated in the beautiful Hamilton Gardens, is run on permaculture methods and values. It is completely spray and chemical free, has 2 chookies ( hens) that are let out of their coop each day to free range, the hen house is also shifted around the garden regularly so the girls can dig over and fertilise each plot, a flow-form water reticulation set-up, and last but certainly not least, a working bee hive !!
There are veges and flowers, herbs and fruit trees grown in this small garden, it is seasonal, rich in insects and birds ..

The hive is placed on a platform on top of a pergola, north facing and protected from the cold south westerly weather by a trellis affair. It is checked regularly by a local bee keeper, as I work down here in the Gardens for the Horticultural campus
of a teaching institution, I am going to ask if I can be the keeper of these bees.
There has been acouple of vandelism episodes where idiots have knocked the hive down, with any luck they got stung, but each time the bees have carried on regardless - such forgiving creatures ..
On a summers day, sitting under the vine covered trellis, if you listen carefully you will hear the contented hum of the bees ..
Actually, most people don`t even notice the hive of industry happening right above them, not unless they stop for awhile.
The bees have a wide range of flowering plants and trees to choose from, including this pretty cherry, Prunus campanulata or Tui tree as it is known here in NZ. The bright pink blossom attact Tui and other nectar drinking birds, it is also the first cherry to bloom - always a welcome sign of spring after a dreary winter. It is not a native tree, cherries being introduced here in the late 1890`s - it is a good source of nectar at this time of the year for native and exotic birds. The Tui in the picture below is sitting on a native flax, Phormium tenax, also another very rich in nectar plant - the bird`s lon

g brush-like tongue getting right down into each flower for the sweet treat ! Tui are real characters, quite big birds with irridescent blue green/black feathers and a white tuft under the beak, also called the Parson bird for obvious reasons. They have an amazing range of song, from the sound of a creaky door right through to the most pure bell-like chiming. They imitate other birds and human sounds, including a chainsaw !
Posted by Ngaio at Thursday, August 30, 2007 6 comments:

Before New Zealand was settled by mainly the British, Scots and Irish in the early 1800`s,( my Meehan ancesters were very poor Irish potato farmers who came here, probably on the bottom of the sailing ship, in 1842,) there were no Apis mellifera here, only different species of native solitary bees. Of course, as where ever they went in the world, the settlers brought their plants with them and expected them to grow ! In our temperate climate and great soils, they did - and how !! Alot became invasive and are now just a curse. Anyway, I digress, back to the bees.

The fruit trees and clover were not being pollinated by the native bees so the first honey bees were brought to NZ by the sister of a missionary, Mary Ann Bumby in March 1839 to a Weslyan Mission station in the Hokianga, which a beautiful area in the north of the North Is. The 2 skeps of bees were brought from Sydney Australia, having been introduced to the state of New South Wales in 1822 - no honey bees there either before the convicts !!

Anyway, there was this Reverend W C Cotton who also brought bees to our fair shores in 1842 from England by ship, this being the only quick way to get here in those days, in fact, the only way really. The good Reverend wrote a book called `My Bee Book` before he left, he starts with this written passage :

The Bee of England, like the Man of England, if he be but good of his kind, is, I think, surpassed by none in the world. I will not get bees from India - nor bees from South America - nor from New Holland, but carry them direct from England, sixteen thousand miles over the sea

Cotton then goes on to describe how he carried his bees across the oceans. Three colonies were placed in a barrel, which he had refurbished and recoppered, and the joints properly fitted. He lined the whole with thick felt. In the lower part of the barrel he packed with ice, with a tap to take off any melted water. The upper part of the barrel with the skep like hives was completely filled around the hives with well dried cinders thus excluding all light and heat. He wasn`t worried about air getting to the bees, but just in case he placed a small tube in each hive leading to the outside world and a tap at the bottom of the barrel to let out melted water. He reckoned that two thirds of the ice would 'cross the line' and a good half of the ice would have melted by the time they reached NZ.

He also tried an evaporation method as well as the ice. he suspended one hive on springs and another on gimbals so that the motion of the ship did not disturb them. He placed the hives in a double case with a wall of water surrounding them which is continously replenished by the ships system. The two cylinders of zinc in which the hives were placed were open at the top to allow evaporation to occur, a piece of rag was placed between the two cylinders so as to transfer water to the top of the hives thus ensuring an even surface over the hives to be cooled. Again he supplied a tube for air supply.

Finally , he made an observation hive which he feed with honey during the journey. We don`t know which plan worked the best as it wasn`t written in his book or the subsequent book ` A Guide for NZ Beekeepers` in 1848. We know at least some survived as the hard-working little honey bee is found through-out the country in the 21st century.
Posted by Ngaio at Sunday, August 12, 2007 1 comment:

Many of New Zealand`s native plants are endemic to our islands, we have been isolated from the rest of the world for millions of years and our plants have developed for the conditions. Before humans settled here, about 1500 yrs ago, there were only 2 species of mammals, a tiny bat and seals, with much bird life, including the extinct Moa and many others now gone for good ..

I am a staunch advocate for the NZ native flora and fauna - here are just afew of our beautiful trees that the bees love !

One of the most stunning trees, Pohutukawa( Metrosideros excelsa) also called NZ Christmas tree due to the fact it flowers over the summer period. It is a large much branched tree which can grow to about 50 metres - these trees literally hum with bees when in flower. It is an iconic NZ symbol and although a coastal tree, it will grow well inland. Dry seasons result in the heaviest nectar flows from Pohutukawa, the bees working the blossoms from dawn to dusk. The flowers offer ample greenish yellow pollen which cover the bees, no more pollen than that required is collected, so copious is the nectar flow.
Pohutukawa honey is water white when extracted and has a unique salty flavour !!

The Kowhai or (Sophora tetraptera) middle of the North Island and (Sophora microphylla) throughout NZ, are one of the best know early flowering native trees. Kowhai can reach a height of 12 metres, bursting into flower in the spring before the new leaves arrive. The bees compete with birds for the large amount of nectar produced form the gorgeous bright yellow bell-like flowers. The pollen is deep orange, but it is the nectar the bees tend to collect. The honey is a light amber in colour with a mild but distinctive flavour. 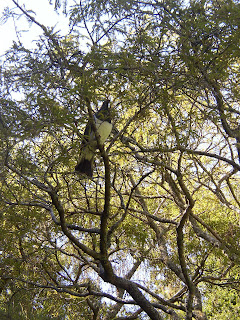 This photo is one I took last year on a visit to Pukekura Park in the lovely west coast city of New Plymouth, about 3 hours from where I live.
The bird is the native pigeon or Keraru, sitting up in a mature Kowhai tree, she/he just sat there while I took photos and generally mucked around under the tree ! As you can see, the tree has a filmy canopy effect, the leaves being quite small and pinnate. The keraru is a stunning bird with beautiful irridecsent plumage, they are so big and heavy you can hear then flying, they tend to crash-land onto small branches - very easy to catch by Maori bird hunters, it is illegal to eat them now !!

forest tree, up to 12 metres high, also known as Lacebark, due to the lacy effect
of the bark when peeled off. The flowers are white and star-shaped, the bees adore it, I do to, it is a lovely tree, it has so many sweetly scented flowers, often concealing the leaves. It flowers in the autumn with the bees collecting large amounts of nectar, the amber honey having a strong but not unpleasant flavour.

ue manuka factor). The common name is Tea Tree, early settlers discovered the leaves boiled (for a good length of time ) made a drinkable brew ! Manuka will secrete nectar under almost any conditions, the rich amber honey varies a good deal both in flavour and consistency, influenced by soil types, weather conditions and the intensity of the honey flow. This small tree is found throughout NZ, I grew up on an isolated sheep farm in the King Country ( central North Is ), my farmer father spent many long hours cutting manuka down, never

realising of course, how rich we would be now if we had known the wonderful healing properties of both the honey and the oil produced by this shrubby, scrubby tree.
Posted by Ngaio at Sunday, August 12, 2007 No comments: