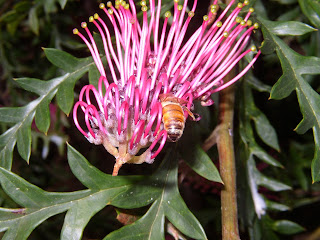 This Australian Grevillia, not sure which one, was covered in bees on a warm spring day. This is one of the many plants grown at Ngaroto nursery, propogated and sold to the public at very low prices compared to the bigger nurseries. I always try and buy from smaller places as I find their plants are usually better cared for and healthier, plus it is supporting a small business. Grevillias grow well here, they don`t mind the heat over summer, being from Australia they thrive on lack of water. They are an excellent source of nectar for the bees and birds such as the Tui, flowering in early spring right through into summer, often when there is not alot of nectar available. 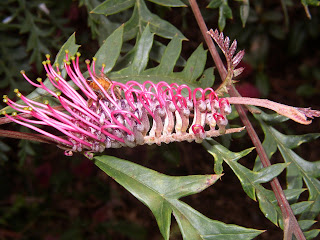 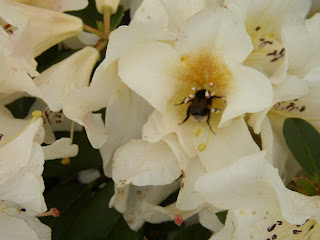 There must have been a bumblebee nest close by as this small, strongly scented Rhododendrum had many small bumblebees diving headfirst into the flowers, emerging covered in pollen ! I love watching bumblebees crash-landing from flower to flower, they look so uncoordinated but really they are proof that nature is amazingly clever - this bee shouldn`t beable to get off the ground let alone fly home with a load of pollen and nectar .. but she does.
Posted by Ngaio at Sunday, September 30, 2007 No comments: 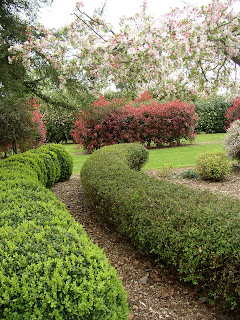 Ngaroto Nursery is a 7 acre wonderland just north of the small township of Te Awamutu, about 30 mins drive from home. I often go there to blow the cobwebs away and recharge my batteries. The nursery sells plants they propogate themselves from the many mature plants and trees grown in the park-like grounds. This is the place I came to after my adored Father died 4 years ago, I could walk and cry with no one to see me ..
It is a beautiful time of the year with the blossom and new growth, the Rhodos were humming with bees and the wee native fantail or Piwakawaka followed us around the garden, darting and flitting quite close, I know its the bugs we disturb, but it always nice to think they are not afraid.


My friend Julie`s foxie, Jess, loves going there, she runs for miles chasing rabbit smells and flushing birds out of the undergrowth - a dog heaven. Thats Julie below, no sign 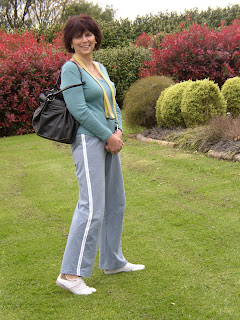 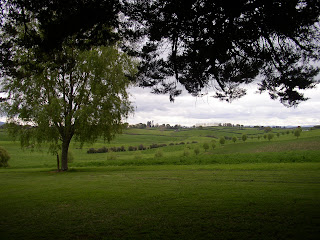 Ngaroto is out in the countryside, surrounded by farmland. Before European settlement the land was covered in native forest with abundant birdlife, fish in the nearby Waipa river and the small lake Ngaroto, ( one of the many peat lakes dotted throughout this part of the Waikato region), nearly all of the bush was cleared for farmland, leaving small remnants of Kahikatea, poisoning the waterways with chemical run-off and nitrogen from the dairy farms - great uh ?
There is also a little cafe where one can sit out under the trees with a latte , always good for the soul ..
Posted by Ngaio at Sunday, September 30, 2007 No comments: 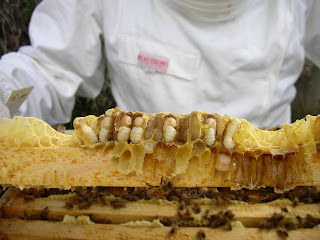 opened both Miro and Matai for the first time after the winter months and look what I found !! The busy little queen has been laying in the top boxes, even with plenty of room the bees have made extra cells on top of the frames which she has also laid in. I knew I should have taken the top 2 boxes off over winter, it won`t happen again thats for sure. I am going to put a queen excluder on both hives and will have to take frames with brood in and swap them around with frames from the bottom box. I put 2 apistan strips in each hive, down amongst the brood, they will come out next month. I did not see any sign of varroa or other disease and both hives were very busy with lots of flying too and fro! For the amount of bees and the time I spent looking through each box, I was amazed at how docile and calm we all were, it was a really peaceful experience - I do like working with bees ... 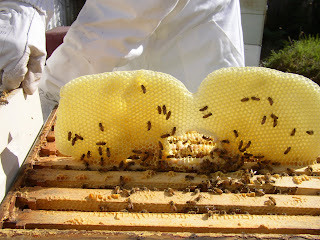 I`m not sure why, but these 2 gorgeous pieces of comb had been built inbetween the 2 top boxes, one had some larvae in it, the other was empty - would anyone know why this would happen ? I took the comb off and kept it for Lia to take to school. There was still plenty of room on the frames for the bees to fill - maybe they decided they wanted a penthouse suite !
Posted by Ngaio at Monday, September 24, 2007 1 comment: 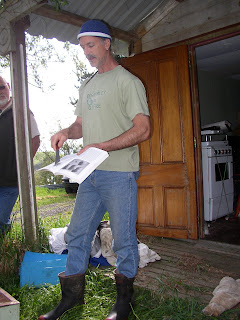 Out west on the Raglan road there is an interesting farm owned by Rick and Liz, where everything, right down to the milk in our tea and the composting toilet, is organic. It was here on Sunday morning I took part in a beekeeping lesson. Rick, seen here at left, explaining some of the differences in the size and shape of the queen, worker and drone, was well qualified to take the course having kept 2 hives on his property for about 8 years. Being organic, there are no sprays or chemicals used and going by the taste of his honey, there is a wide variety of flowering trees and plants around. They grow specific bee food like Tree Lucern which flowers twice a year.

Most of the other people there did not have their bees or hives yet so all the equipment needed was shown and explained, including the smoker - very important ! Rick explained the different materials used in the smoker, he prefers dried pine needles which do give off a pleasent smell and light smoke, what the boxes are used for, the different sizes, clothing needed, pests and disease including the varroa mite which is here in New Zealand now and for which we have to 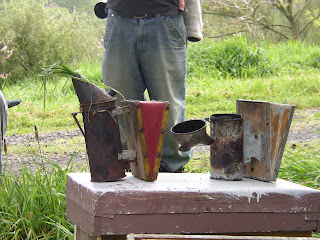 treat our hives on a regular basis. The queen excluder was on one of the hives and it was a good example of how it works, especially at this time of the year when the queen has started to lay, she will often lay up into the top boxes if given the chance. The picture below shows Rick clearing out propolis that the bees have started to put on the excluder. The course was run by the Envirocentre in Raglan, they also run permaculture, sustainability, seed saving and eco sourcing lessons. Raglan is a great little seaside town on the west coast of the North Island of NZ. It has a large number of people living there that are artists, writers, weavers, alternative life-stylers - great cafes and shops. It was a sleepy village for many years but is now a popular destination for day trippers plus has the best left-hand surf break in NZ. 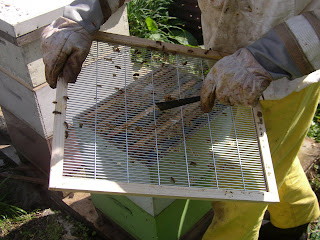 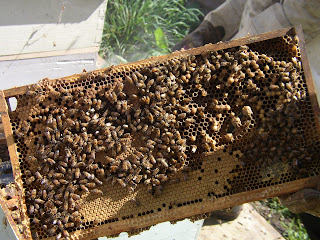 We had a good look at some of the frames from the more docile hive, apparently the other one is quite agressive ! There were a number of drone cells plus worker brood, pollen and as we expected, queen cells.

I found I knew about most of what was being talked about, but it was wonderful being with like-minded people all really enthusiastic about keeping bees. I don`t think any of them lived in an urban situation like myself so that is my next goal, to get more bees in the cities !
Posted by Ngaio at Monday, September 24, 2007 No comments: