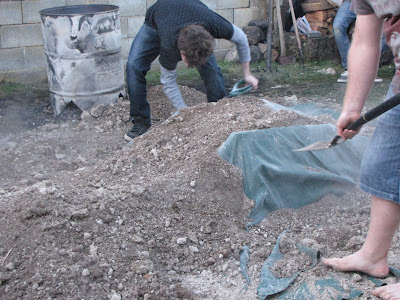 Some of the men uncovering the hangi pit - the soil is quite hot at this stage
Last evening Ellena and I went out for dinner - to a hangi - what is a hangi you are thinking ??

It is a meal cooked under the ground in a pit with stones that are heated to a high temperature by fire, then the fire is put out, the food in wire baskets is put on top of the stones and the whole lot covered in cloth and then the soil from the pit - left to cook in the steam all afternoon. 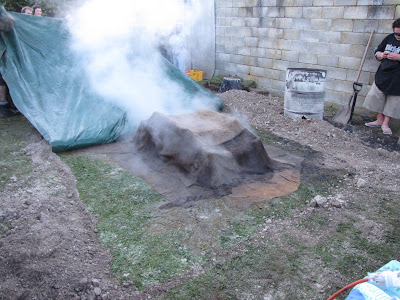 With the cloth drawn back and steam let out of the cooking pit. 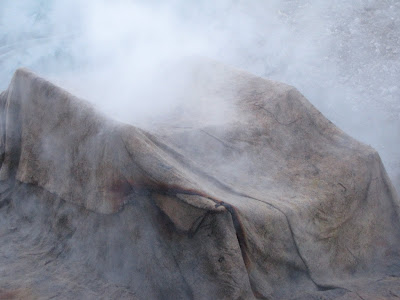 The last layer of cloth is sacking which is very good at keeping the heat in - the smell by this stage is something else. 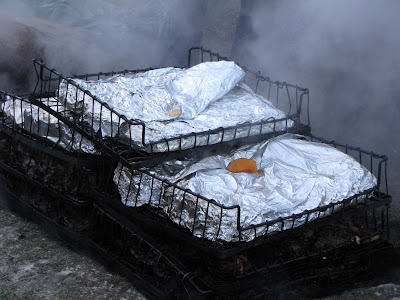 The veges are wrapped in tin foil 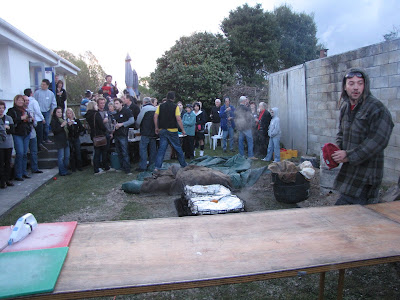 Some of the 100 people there !! Stew and Leah who put this feast on ,own 2 very trendy cafes in Hamilton, Ellena works at `Jacks` on the weekend, hence our invite - this evening was a `thankyou` to staff, clients, family and friends who have all helped to make their business`s so successful - a really nice young couple .. 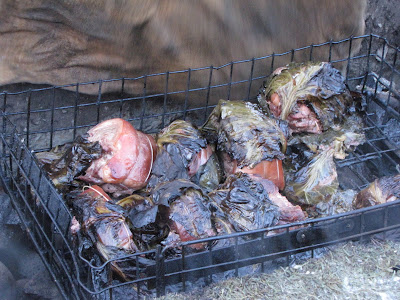 One of the 6 baskets of meat !! Pork, lamb and chicken were wrapped in cabbage leaves to keep the salty juices in and cooked to perfection - the meat actually fell off the bones 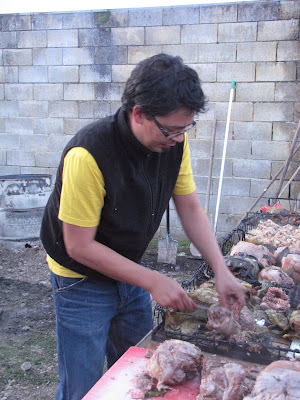 Stew, the chef, busy cutting the meat - there was so much food plus salad followed by brownie and cream - all very yummy. I hadn`t eaten hangi food for many years and had forgotten the `special` taste the food has, a mixture of earth and steam if you can imagine that ? Maori cooked in hangi, there are many old pit sites around the country with shells and bones in them. Other Pacific Islands have their own version called an Umu, which is run the same way. Any fat in the meat tends to run out the bottom onto the rocks. Maori still cook in this way especially if there is a big event on, in Rotorua a tourist centre, the food is placed in baskets and left in the thermal hot pools to cook, tends to have a slight sulpher taste then ! 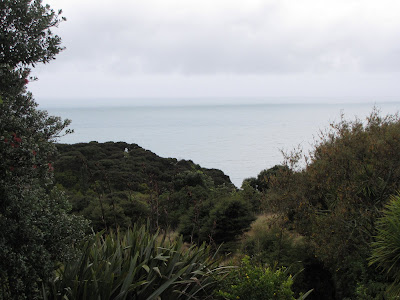 Yesterday I spent a remarkably good day out at a small, quirky seaside town on the West coast, about 40 mins drive from where I live. I had been asked by the local Whaingaroa (Raglan) enviro centre, along with a friend who lives out there and who has a hive, to put on a beekeeping workshop. The picture above is the view from Barbara and Pat`s gorgeous home, nestled in the bush on the side of a hill overlooking the ocean - I was in heaven !! 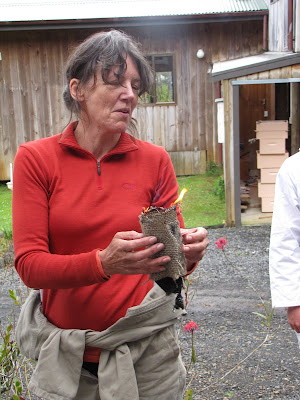 This is not a flattering photo of Barbara, but does show her lighting her smoker - she, like me, has trouble keeping it going at times !! After we had finished the demonstration at the hive the flaming thing sent up yards of smoke after going out acouple of times when we needed it - murphy`s law ! 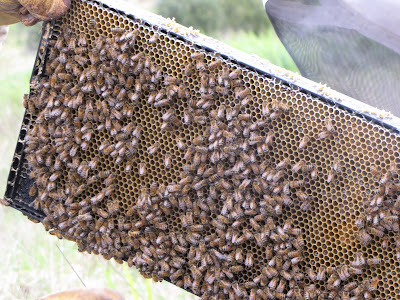 A healthy looking frame with pollen and nectar starting to be brought in - the hive is on the side of a hill with a great view out to the sea and native bush. There are a number of trees flowering, Pohutukawa, Karo ( Pittosporum crassifolium), Kowhai, (Sophora tetraptera) and alot of Kanuka which will flower later. Barbara always get a good yield of honey which a yummy bush flavour. 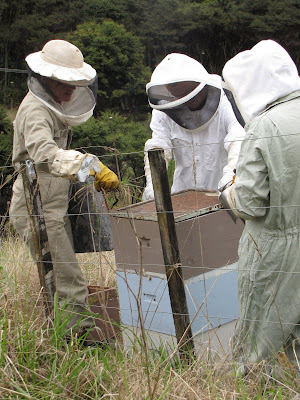 Most of the class had brought their bee gear or borrowed some. It wasn`t a great day weather-wise, but we opened the hive for a short time so everyone could get an idea of what it looks like inside a working hive. Barbara took out acouple of frames, one with brood and the beginnings of a queen cell. Barbara keeps black bees which were the original English honey bees and has mixed with Italians and Carniolins over time - they still are alot more aggresive then the others, which is why she keeps them as they have a big problem with wasps killing hives over summer and autumn in bush areas. 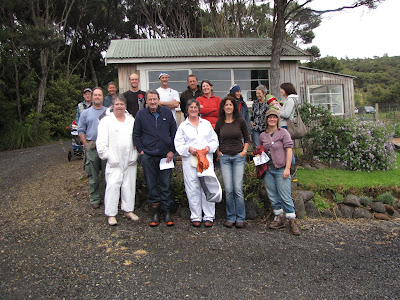 Above is the group shot - me being at the front on the left - I usually avoid photos, but I figured being that far back I might fade into the distance ! Everyone is very keen to keep bees which is what I feel so passionate about - getting the word out there and showing people that it isn`t hard and you are not going to get stung to death if you do it properly and wear the correct protective clothing. They were amazed at the fact I don`t wear gloves - I put my hand gently into the hive to demonstrate that bees are generally far too busy going about their business to stop and sting something that isn`t hurting them ! 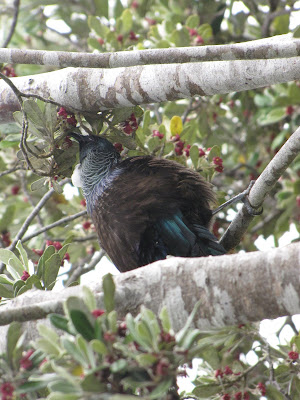 Last but certainly not least, here is a photo of a puffed up Tui - all very territorial at the moment, swooping from tree to tree and vocal ! Tui are a NZ native bird, quite big and have the ability to mimic a huge range of other birds and human sounds. There was a story about them in the old days when our beautiful bush was being felled, Tui would mimic the axe chopping and the voices of the men. If you listen closely you can hear snippets of other bird song plus a creaky door and then a beautiful melodious tune - very clever birds. They are an irridecent black/bluey green with a white fluffy piece under their chin, hence the name `parson bird` by early settlers. They make quite a loud wooshing sound when they fly, are bossy and tend to chase smaller birds away - there were so many out at Barbara and Pat`s place, I am very envious . . .
Well, that was my day, I caught up with my eldest daughter Meg before I left the township, Meg and my grandaugher, Lia, have lived at Raglan for about 10 yrs now, if I didn`t have to commute every day I would live there to - it is still NZ as it was but with all the mod cons and far enough away from the cities to be peaceful. Lots of very interesting people live there, wonderful artists in all mediums, folk whose families settled there over a hundred years ago - a real mixture. I drove home after calling in to see friends and pick up free range eggs, with a contented smile and mark knoffler playing his magic guitar - it is good to be alive !! 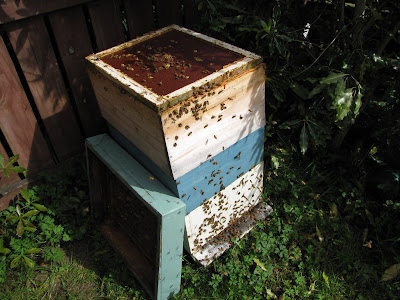 I have just finished teaching 2 beekeeping night classes for 6 weeks at a local High School with the last lesson a visit to my hive - please excuse the state of my back yard, I have no time for gardening at the moment !! 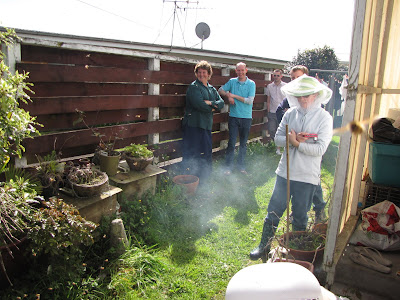 Some of the students watching me take the top off the hive, as there are alot of bees in the hive at the moment and quite afew people don`t have their protective gear yet, I didn`t take the top board completely off. As it was, the bees were very well behaved and no one got stung !! I had another 7 or so people standing on the other side of me, all very interested and keen to keep bees. 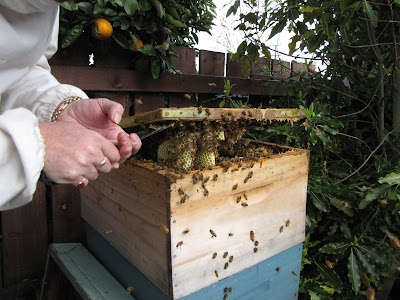 It was the first time I had opened the hive for acouple of months and they have made quite alot of comb, especially where there were no frames. I don`t mind as it is easy enough to strain the honey out, I will most probably leave it there for the bees to use and put a honey super on top fairly soon. If this hive does not swarm I may have a go at splitting it, never done that before it can`t be that hard ?? 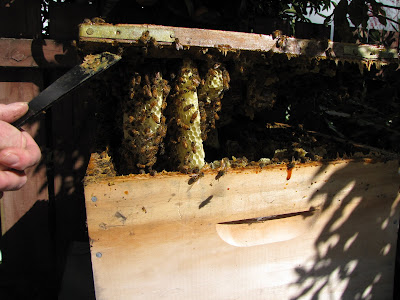 I think the comb is beautiful, such a work of art and when they make it naturally it just seems to glow.
I don`t wear gloves as I find them to bulky and I end up squashing bees, this way, I go very carefully and usually don`t get many stings, none yesterday which was good for the students to see.
I have been asked to teach the course again next term which is in about 3 weeks, heres` hoping we get the numbers again, it was so popular I ended up doing 2 classes. The verbal feed back has been very encouraging, I seem to have taught them what they needed to know and instilled confidence enough to at least think seriously about keeping bees with many actually doing it - just what I intended - more beekeepers in our world ! 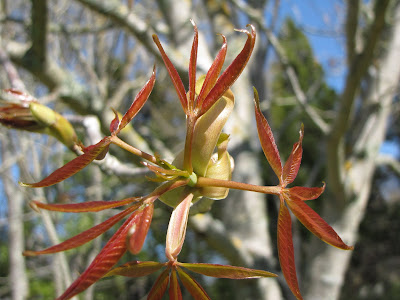 Once again we have stunning spring days. The trees are bursting into leaf or flower with the Horse Chestnut above sending out star shaped leaves from a sticky bud. I spend alot of my day looking up ! 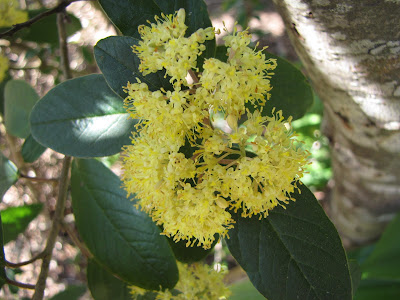 The native Kumarahou is flowering everywhere, all along the sides of the road in rural areas. The bees love the yellow pollen and sticky nectar from the early spring flowering small tree, it grows well here in the Waikato. 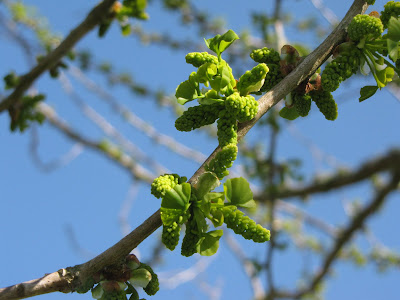 The amazing Ginkgo - what a prehistoric looking plant this beautiful tree is. I love the way the flowers and leaves grow from the wood, the waxy leaves spreading out into tiny fans, the bright spring green colour heralding the new season.
I am enjoying playing with my new camera, a Canon PowerShot SX1015 - I still have lots to learn about it, so as you can imagine, the camera goes everywhere with me - my family ask when am I going to take photos of humans ?? I have 3 grandchildren that get photographed alot, I need to get some printed, it is easy to forget with a digital camera, I miss not actually having a hard copy to look at.